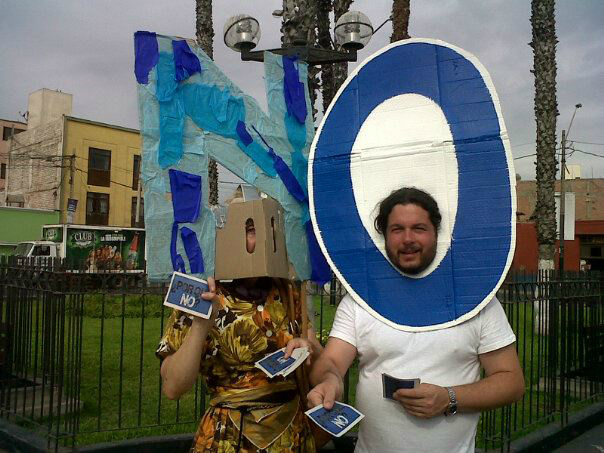 We want to help Susana Villaran with her campaign. By chance in an organic shop we meet a lady who is in the neighborhood group 'Support for Susana. We go to the meeting and are warmly welcomed. Our contribution to the campaign is obviously more theatrical than verbal. Although we speak Spanish is our skill and knowledge is too limited for political discussion in the street . During the next six weeks we meet and campaign on Sunday. On our suggestion also the poorer parts of the district are visited. There is the very human tendency to communicate only with supporters. The campaign groups are self-organized and self-supporting, also financially. There is a general campaign, but that only takes shape in the last weeks before the election.

Susana Villarán eventually wins by a small margin. The council members from her party are not re-elected. She is now insulated and must follow a consensus politics. So the men of Castañeda lost but achieved an important victory.

At the time of our residency a battle for the future of Lima is being fought. At stake is the role of government. Should they lead or serve. Is it about powerful or accountable governance? The current mayor, Susana Villarán, says she is an instrument for the public interest. They need no special attention or privileges: to serve the city is enough. Her opponent, former mayor Luis Castañeda Lossio claims that only through personal leadership and personal contacts Lima can move forward. The post of mayor of Lima is important: Lima is the capital of Peru but especially the residence of more than one third of the population. The economy of Lima determines how it goes with Peru. The mayor of Lima is almost as powerful as the president. Susana Villarán was elected in 2011 because people were tired of Castañeda. Corruption, nepotism and arbitrariness characterized his regime. Big players could do good business with Castañeda, it paid to be his friend. Decisions were made behind closed doors. Horrible, one would say, down with that man. Yet too many had benefited from this policy. If you knew the right people, or people who want to represent your case, there was a good chance of success. Not fair dealing, but very practical. It is suspected that the mayor himself as well benefited from these doings. He has contacts with major international companies. More on that later.

Mayor Castaneda Lossio is a sore loser. The day after his dethronement a group of 'concerned citizens' requested for a so-called revocatoria. A recall. The law which they invoked is the law against corrupt policies. That gives citizens the opportunity to demand a referendum on new elections. For this an amount of signatures required. In Lima, which was 1 million. These were collected in a short time.

Of course it is weird that you are already 'concerned' before the new mayor takes office. There must be a reason. There was. In the background. The transport system in Lima is private. There is no publicly owned transport. To a large extent, the service is operated by small business owners who have a bus or taxi. The permit for the route and the license of the car half legal, half negotiated. The union therefore is powerful and rich. The quality of the busses is poor. They are dirty and unsafe. Susana Villaran wants normal public transport. Down with the bribes and bad buses. The union was furious. Their power and income were threatened. The union had every reason to be 'concerned'. They mobilized the drivers to sign.

Now the more public reason. In the center of Lima there was a big market. La Parada, the stop. Healing, prostitution and drug sales were an important part of the activity. Nevertheless, the market could exist decades. No mayor thirst action against the mafia who ruled there. Indeed, tolerance just came with a price tag. However, new Mayor Susana said it's over, close the Parada. This resulted in riots, wounded people. A death. The riots started "accidentally" when the mayor was out of town. The instigators were no market people, but young muscular men. As it turned out later, after the revocatoria, that some of them were ex-prisoners, who had been released early by the party member of Luis Castañeda, and were 'on call' as a return favor.